This impressive story-driven piece was created with many aspects of the organization’s journey to being crowned MLS Champions.

The outer edge of the face is lined with gorgeous stones and is anchored by the title of 2020 MLS Cup Champions.

Side:
The outer edge is accented with impressive diamonds. 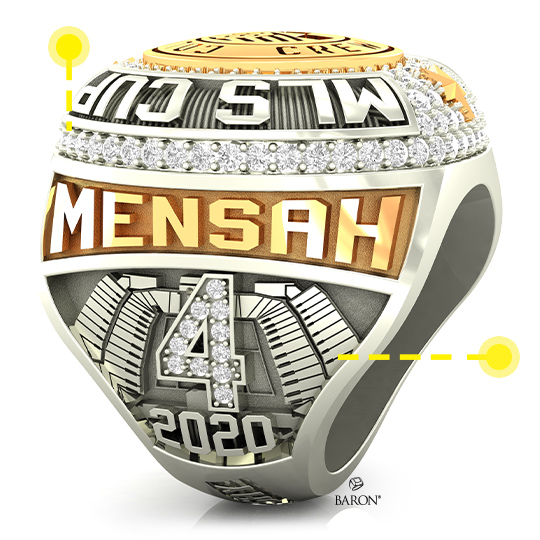 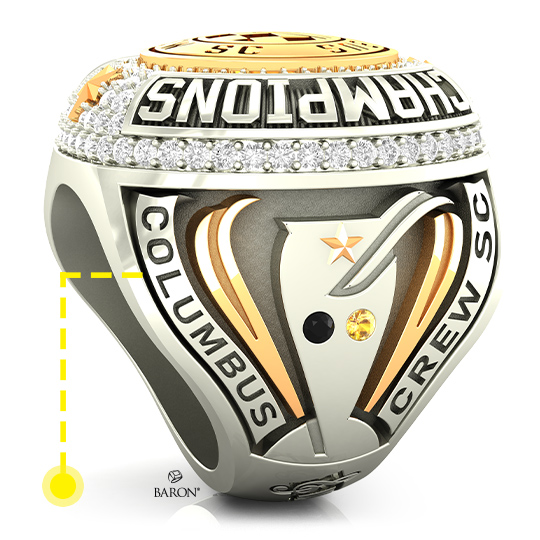 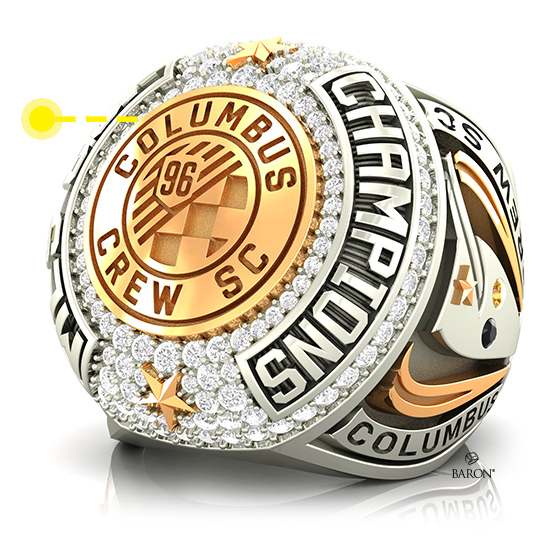 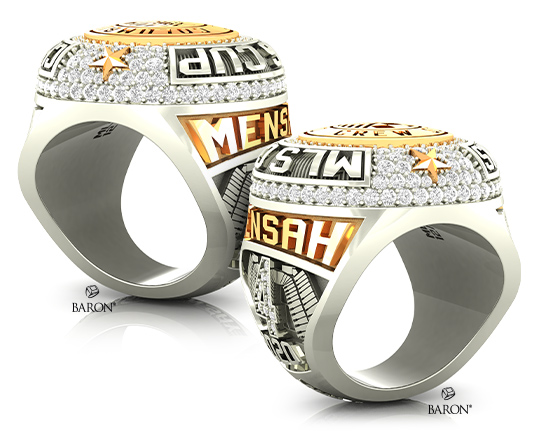 Left:
The left shoulder displaying the player’s name, number, and year over the MAPFRE Stadium background. 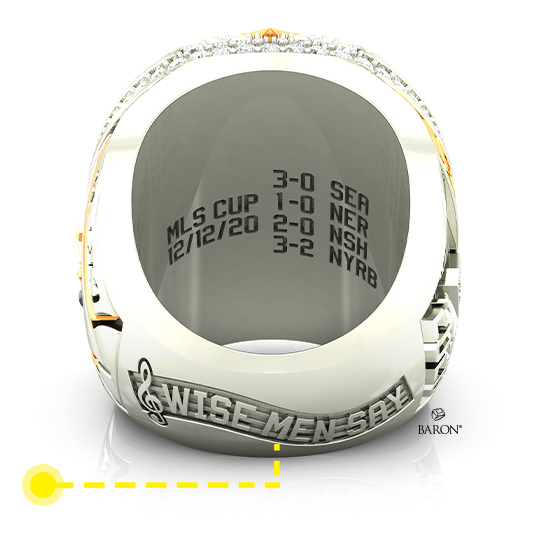 Engraving:
The shank carries the team’s adopted “Wise Men Say” song with the final scores of the run to the MLS Cup victory.

The outer edge of the face is lined with gorgeous stones and is anchored by the title of 2020 MLS Cup Champions.

Side:
The outer edge is accented with impressive diamonds.

Left:
The left shoulder displaying the player’s name, number, and year over the MAPFRE Stadium background.

Engraving:
The shank carries the team’s adopted “Wise Men Say” song with the final scores of the run to the MLS Cup victory.

The road to this 2020 MLS Cup Championship was unique in so many ways, it was a season full of change throughout the club, the league, and the world itself.

Nonetheless, the end result despite all these obstacles saw the Columbus Crew lifting the MLS Cup in their home stadium.

Unfortunately, the pandemic halted the beginning of the MLS season, leaving many wondering what would happen next in the MLS tournament.

Thankfully, the Canada soccer league of MLS board elected to operate a brand new tournament to be played in Florida, known as the “MLS Is Back Cup”.

What is the MLS is Back Tournament?

At the time, this tournament was one of the first professional sports to get back up and running following the pandemic. As a result, allowing lots of new eyes to catch the action of the MLS.

It is worth noting that the MLS 2020 regular season had started 2 matches prior to the pandemic shutting the league down. Hence, the MLS is Back Cup was a great stepping stone to get the players back in shape to resume the regular season.

The Crew topped their group in the preliminary stages of this new tournament.

Regardless, their time in Florida would be cut short at the hands of Minnesota United, losing in a penalty shootout.

The bright spot of this new tournament is that the new players were able to gel with their teammates in high-stakes matches. As a result, helping their chemistry to grow as the 2020 MLS regular season was soon to kick off once again.

Proud of everything this club was able to achieve in 2020 during a difficult year. So grateful for my teammates and everyone at the club and this special lady for always supporting me ❤️?? pic.twitter.com/MUXVzl9jhR

Although the Crew did not win the MLS is Back Cup, the team was able to use the tournament as motivation to succeed in the regular season.

In the meantime following the regular season’s restart, the club started with 5 wins, 2 draws, and 1 loss in their first 8 matches back in action.

The Crew hit a rough patch in the fall, as they were unable to keep up the good form set in the summer. However, this would not cost them a spot in the 2020 MLS playoffs. After a dismal season in 2019, making the playoffs alone would have been seen as a success.

Although, the Crew had bigger dreams to achieve in 2020. The Columbus Crew finished as the 3rd placed team in the MLS Eastern Conference, along with 4th in the MLS overall table. In fact, an incredible turnaround within a year.

The first game of the 2020 postseason was a nailbiter, a 3-2 victory over the historic New York Red Bulls.From this match on, the Crew did not concede another goal the rest of the playoffs on their path to capturing their second-ever MLS Championship Ring. The quarter-finals saw the Crew defeat Nashville S.C. 2-0 in extra time.

Overall, followed by a semi-final win over the New England Revolution, 1-0, to punch their ticket to the MLS Cup final. The 2 teams played on Dec. 12 at Historic Crew Stadium. In the final match, the Crew was facing one of the league’s perennial powerhouses from the pacific northwest, the Seattle Sounders. The Sounders entered the 2020 MLS final as the league’s defending Champions and were looking to go back to back in their 4th MLS Cup final in the last 5 years. It is almost like a fairytale to think that the mighty Sounders were one last challenge for Columbus after all the challenges the Crew had already faced throughout the last year. 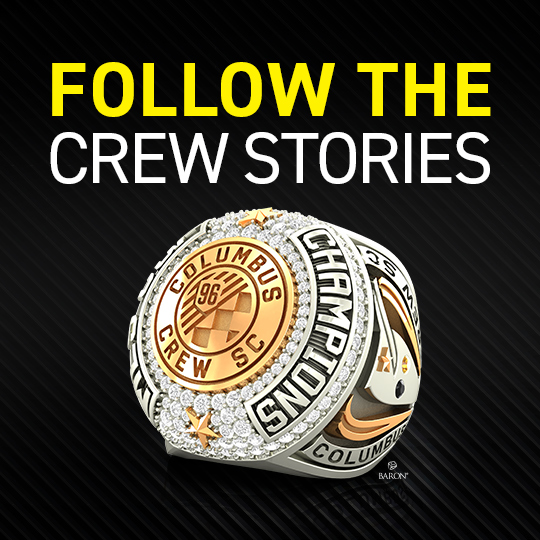 Get ready to shop the Columbus Crew Championship Collection. 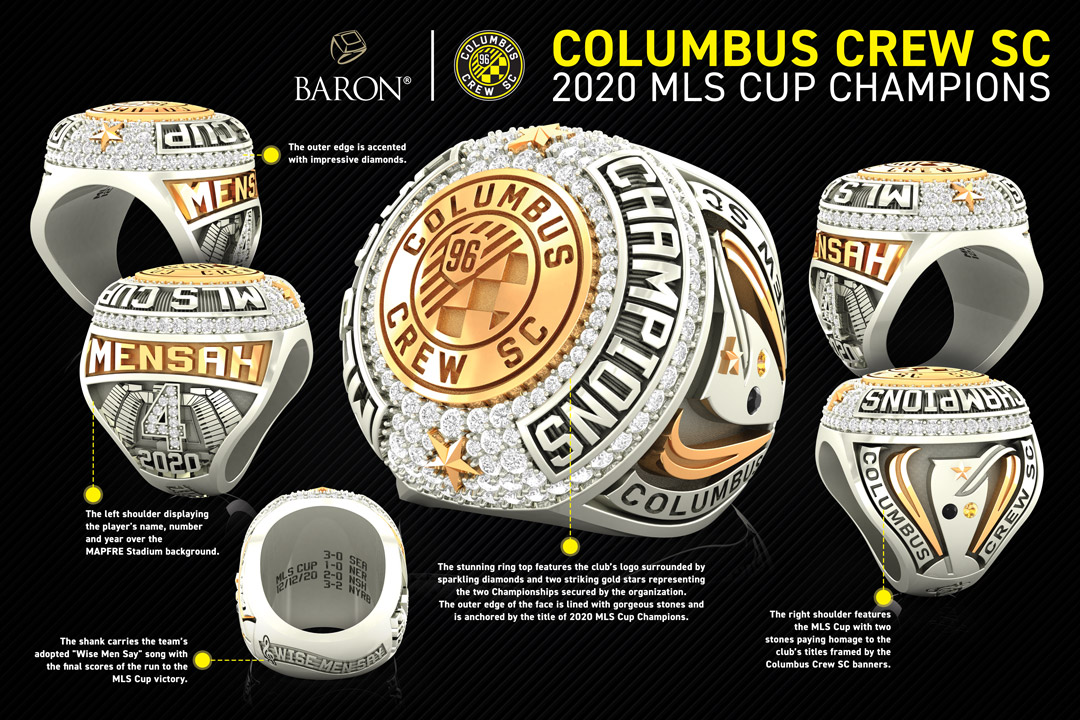 The Official 2020 Columbus Crew MLS Cup Championship Ring: The Details and Stoy of the Ring

The Soccer Championship Ring that will be given to the Columbus Crew is a thing of beauty.

The MLS Cup Ring resembles the difficulties and challenges that the team and staff overcame in 2020, a truly great reward.

On the top of the Columbus Crew Championship Ring is the team’s classic crest logo, surrounded vertically by two gold stars, resembling the two MLS Cup championships won by the franchise.

Engraved on the inside of the Ring is their path to glory. To illustrate, a list of the opponents the Crew defeated in the playoffs along with the corresponding scores in those matches.

On the bottom shank of the ring is a musical bar filled in with the lyrics “Wise Men Say”, reflecting on the most popular chant of the Crew supporters group. This is a great touch to the ring that includes the fans in the success of the club, despite their absence in the crowd during the 2020 season.

Get ready to rep the champs.

All in all, the season and custom Championship Ring both signify that unity is the best way to beat challenges like Covid-19 and so on.

Collaborate with our designers to create custom team rings or even an individual piece. At Baron®, we recognize that each client has their own personal style, vision, and budget in mind.