State champions continue to be crowned across the country as the high school volleyball season enters the final stretch.

Marymount, the No. 1 team in the MaxPreps Top 25 heads to the CIF Open Division bracket as the top seed in the south after besting Mater Dei in the Southern Section finals.

The Sailors faced perhaps their biggest test of the season as No. 7 Mater Dei pushed them to four sets in the CIF Southern Section Division 1 finals over the weekend. 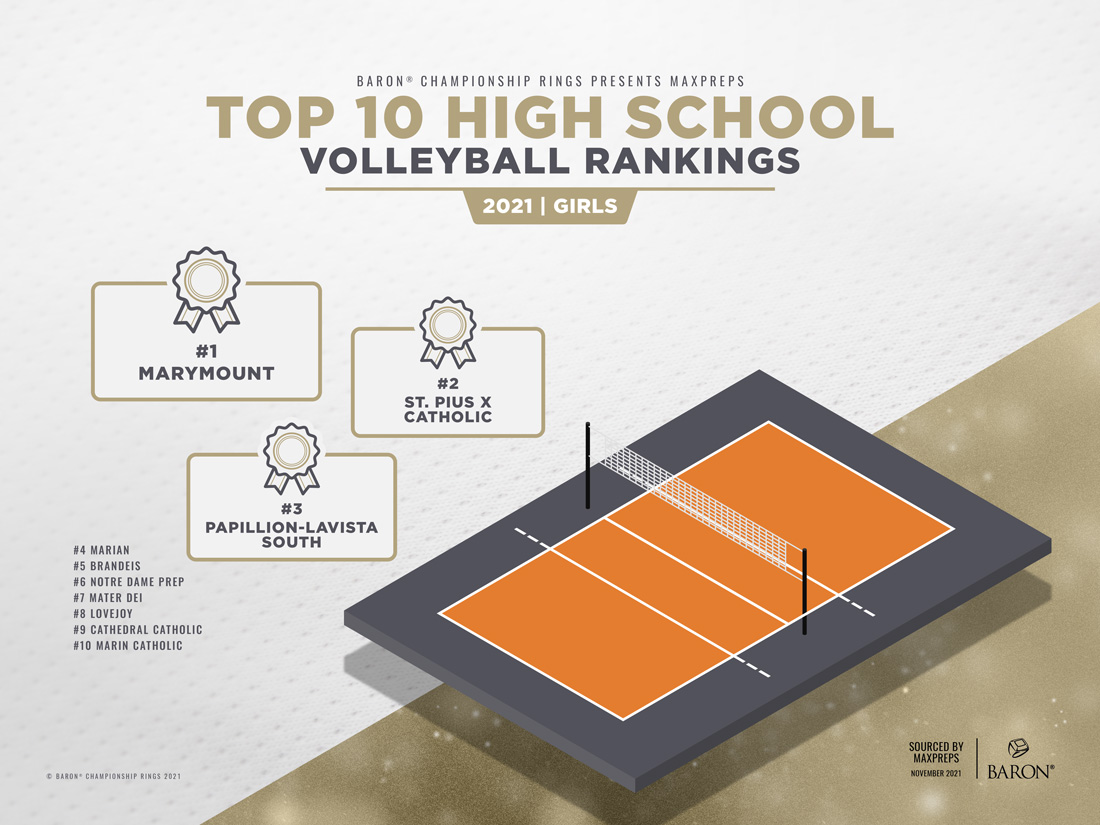 Marymount Sailors revealed the team traveled to Phoenix, AZ past weekend for the NIKE Tournament of Champions Southwest and brought home another trophy after a strong performance. Additionally, the team revealed winning CIF D1 Championships, beating Mater Dei in 4. As a result, crowned as Officially Undefeated Champions.

“This win caps a Back-To-Back-To-Back Championship for Marymount Volleyball.

The Sailors faced perhaps their biggest test of the season as No. 7 Mater Dei pushed them to four sets in the CIF Southern Section Division 1 finals over the weekend.

The Monarchs are one of seven teams to take a set off the top-ranked team.

Marin Catholic is opposite Marymount as the No. 1 seed in the Northern California bracket and the two appear on a collision course in the Nov. 20 final.

In the Midwest, Papillion-LaVista South capped its unbeaten season with a Nebraska Class A title, its fifth. The Titans dropped four sets all season on the road to perfection.

Also in the Cornhusker State, it should be noted that bubble team Skutt Catholic grabbed a Class B title with a 3-1 win over Norris, the seventh straight state championship for the Skyhawks.

However, No. 14 McCutcheon didn’t need to go past three sets to earn their first state title with a sweep over Castle behind high-flying Chloe Chicoine who adds an Indiana crown to her US U18 bronze medal.

Record: 40-0 | Last Week: 3
Highlights: Stella Adeyemi had 14 kills, Lauren Medeck added 12 and Kansas State commit Ava Legrand dished up 36 assists in the finals sweep over Millard West. It was the fifth state title for the Titans, who dropped four sets all season, and the third unbeaten title for the program.
Next week: Class A champions. Season complete.
School: Papillion-La Vista South High School

LEARN ABOUT THE TEAM

Record: 48-1 | Last Week: 4
Highlights: The Mustangs begin their quest to repeat as regional play begins this week against 31-8 Novi. Marian has dropped three sets all season, one to Rockford and two to Notre Dame Prep in the Mustangs’ only loss of the year.
Next week: Nov. 9 vs. Novi
School: Marian High School

The Lovejoy High School Varsity Volleyball team secured the Area Championship! We are #LovejoyProud and can’t wait to cheer them on in the next round of the playoffs! #KidsComeFirst #OneHeartOneLovejoy #BestTodayBetterTomorrow pic.twitter.com/eLRf8Fb153

Record: 37-6 | Last Week: 8
Highlights: The Leopards took another step in their quest for a third consecutive 5A title with a sweep of Wilson. Seniors Rosemary Archer and Grace Milliken lead the hitting attack.
Next week: Nov. 9 vs. Wakeland
School: Lovejoy High School

Congratulations to the Lovejoy Lady Leopards Volleyball Team on their Regional Quarterfinals win! The team now moves to the Regional Semifinals competition. We are #LovejoyProud! #KidsComeFirst #OneHeartOneLovejoy #BestTodayBetterTomorrow pic.twitter.com/iegQcevOP4

Congratulations to all Volleyball Teams for winning your 2021 Games and Volleyball Championships!

Baron® congratulates all winners during the 2021 Volleyball Championships.

Are you looking to design a custom Volleyball Championship Ring? Contact us through the form and we’ll guide you to creating your own Volleyball Ring.

Let us know on Facebook and Twitter the teams you cheered on this year? Share your thoughts with us on which team’s Volleyball Championship Rings are your favourite? Don’t forget to share the Top 10 High School Volleyball Rankings Of 2021: | Girls |.