Birmingham, AL – Baron® Championship Rings was honoured to have been invited to participate in the NJCAA 2022 Convention presented by the Marines, which was held in Birmingham, AL April 11-15.

The NJCAA is an extremely important part of the Baron® portfolio, and we plan on playing a substantial role as their new partner.

We believe our strong foundation, ever-progressive design, and manufacturing capabilities will support the pivot the NJCAA has made from their previous supplier.

“After a successful virtual event last year, the NJCAA is thrilled to welcome back the action-packed 2022 NJCAA Convention in person with the latest association updates, professional development sessions, and the largest exhibit hall in the event’s history,” stated Dr. Christopher Parker, NJCAA President, and CEO before the event start.

“The convention provides time for the NJCAA to come together for the betterment of our members and association.” 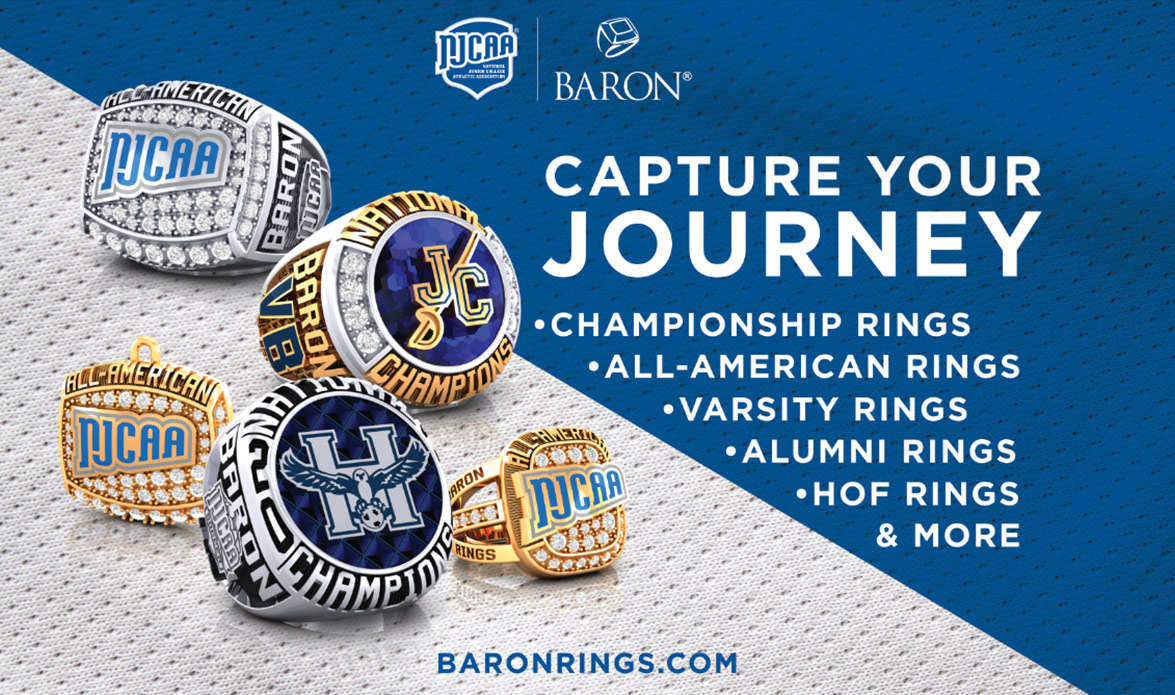 Convention attendees were able to have the opportunity to take part in several sessions and programming specific to their day-to-day role within the NJCAA on April 11-12.

Some of the session topics included:

On April 12, the event held an off-site evening social at the City of Birmingham’s new football stadium, Protective Stadium. From April 12 to April 13, convention attendees had direct access to a variety of official NJCAA partners and sponsors at the convention exhibit hall, featuring over 40 exhibitors.

The 2022 NJCAA Annual Awards were held the night of April 13 and recognized the achievements of individuals within the association’s leadership structure, member colleges, and contributors, as well as former student-athletes. View Past Recipients

The following awards were created to provide proper recognition to those that have served the association honourably, helped advance the mission of the association, or have helped raise the profile of the NJCAA through their accomplishments:

The Reed K. Swenson Leadership Award – The award seeks to recognize those that have demonstrated superior leadership and achievement in contributing to the advancement of amateur athletics. View Past Recipients

The Mary Ellen Leicht Service Award  – The award is given to those – most often not an athlete – who have made significant contributions to two-year college athletics on a national level for an extended period of time. View Past Recipients
Brian Beck – NJCAA National Office
LeAnn Cox – Visit Hutch

2022 Loyalty Award -The Loyalty Award is given to an active athletic director in the NJCAA membership that has worked to uphold the ideals of the organization. View Past Recipients
Darin Monroe – Rock Valley (IL) | Athletic Director, Head Softball Coach

2022 Appreciation Award  – The Appreciation Award is handed out strictly at the discretion of the current NJCAA President & CEO to recognize superior contributions to the Association. View Past Recipients
Lea Plarski – NJCAA Leader and Former President

2022 Merit Award  – The Merit Award has been given to NJCAA alumni in various fields including professional sports, politics, and music. View Past Recipients
Zac Taylor – Butler (KS)

NJCAA Partnership Ring Package — Inside you will find the latest and most popular Championship Rings designs for top trending sports! As a Championship-focused brand, our relentless commitment to design, craftsmanship and superior story-driven products, are what drive the Baron® Experience to our High School, College and Pro Market clients. Choose from a large collection of ring styles, stone colours, shoulder and metal options, to help you create the perfect custom Championship Ring. Contact Paul LaMantia, Director of Collegiate Sales at Baron® Championship Rings.