2022 Big Game: 22 Facts To Know About The Championship

To celebrate the 2022 Big Game, here are 22 facts to know about the Championship: Los Angeles Rams, Cincinnati Bengals, SoFi Stadium

“That’s why they’re world champs because our best players stepped up in the most crucial and critical moments.”

It is the first Championship for Rams since returning to LA from St. Luis and the team’s second with a win in 2000.

The second touchdown pass to Kupp with 1:25 remaining had won the football Championship for the Rams.

In fact, Kupp finished with eight catches for 92 yards and was named the game’s MVP.

“Obviously it stings,” Burrow said. “But we had a great year. It didn’t come out this last game the way we wanted to, but I think we still have something to celebrate.”

Coach Zac Taylor for the Cincinnati Bengals response to the game and for the team’s accomplishments.

“We’ve done it the right way. We are a first-class organization from top to bottom. I think that we’ve given the fans something really to be proud of and cheer about. And that’s a plus for us.”

“It was unbelievable,” one of the Rams fans said about the fact it came down to a last-minute play.

On the other side, “It was a hard-fought Championship” said one of the Bengals fans.

“It was a good game, it was amazing. I’m going to be disappointed tomorrow. So much fun watching this.”

“That last drive was a special drive that I’ll never forget,” Stafford said.

BRING THIS MAN HIS RING!

WORLD CHAMPS! CAN'T NOBODY TAKE THAT AWAY! pic.twitter.com/2AxjGU9rSN

Let’s take a look at how everyone reacted to Los Angeles Rams winning the Super Bowl LVI.

Congratulations to @RamsNFL Defensive Coordinator Raheem Morris’ unit, whose 7 sacks shut down the Bengals and led the #Rams to a #SuperBowl victory. pic.twitter.com/qLbr5PI7ne

That was amazing, #Rams ! pic.twitter.com/3EfFcAKdGd

Congrats to the champs, @RamsNFL! 🏆 pic.twitter.com/PpL7DAgnqE

22 facts to know about the teams that competed

Let’s take a look at 22 facts surrounding the Championship.

Super Bowl LVI was played in SoFi Stadium, which is the home field for the Los Angeles Rams and Los Angeles Chargers.

There are plans for SoFi Stadium to host the College Football National Championship game in 2023 and the Opening & Closing Ceremonies of the 2028 Olympic Games.

SoFi Stadium is the first indoor-outdoor stadium to be constructed.

The centerpiece of the 298-acre sports and entertainment district, SoFi Stadium provides for a seating capacity of 70,000, expandable up to 100,000.

While Paul Brown Stadium is the home field for the Cincinnati Bengals.

The Bengals were set to be the official home team for Super Bowl LVI due to the NFL alternating the destination between conferences each year. Specifically, it means the Cincinnati football team set to use the Rams’ home stadium locker room during the game.

The previous record was held by Steelers Coach Mike Tomlin who was 6 weeks to turn 37 when Pittsburgh defeated Arizona in Super Bowl XLIII. (CBS Sports)

The Rams’ defense set with seven sacks of Joe Burrow, matched the 2015 Rams, 1985 Bear, and 1975 Steelers with the most sacks in a Super Bowl game.

Los Angeles along with last year’s Super Bowl LV Champions Tampa Bay Buccaneers are the only teams to win the Super Bowl on their home field.

In fact, the Rams are the only team to win both the Super Bowl and the Conference Championship in their own stadium.

Bengals quarterback Joe Burrow’s 75-yard touchdown pass to wide receiver Tee Higgins set the record for the quickest second-half touchdown in Super Bowl history. The wide receiver crossed the goal line just 12 seconds into the second half to give Bengal a 17-13 lead.

Cooper Kupp broke the all-time record for most scrimmage yards by a receiver with 1,965.

Bengals’ top receiver, Ja’Marr Chase, was drafted fifth overall in 2021 out of LSU, where he played with Burrow. The rookie broke a franchise record with 1,455 yards on the season, the fourth-most among all NFL wideouts.

Of all receivers with at least 500 yards, Chase ranked second in the NFL in yards per catch (18), behind only the 49ers’ Deebo Samuel. His 13 TDs ranked third in the league.

Ram’s Coach Sean McVay,36, was up against Bengals Coach Zac Taylor, 38 in the Super Bowl LVI. As a result, marked the youngest pair of Super Bowl head coaches in the game’s history.

13. Coach Zac Taylor’s past positions with the Rams

Taylor worked under McVay directly before becoming Bengals coach, spending one year as the Rams’ assistant wide receivers coach (2017) and one as the team’s QBs coach (2018).

The Rams won two Championships before the Super Bowl era, first as the Cleveland Rams in 1945 and then as the Los Angeles Rams in 1951.

The Rams won two Championships before the Super Bowl era, first as the Cleveland Rams in 1945 and then as the Los Angeles Rams in 1951.

Los Angeles was a host to some of the historic moments in the Super Bowl and NFL Championships, including the Green Day Packages defeating the Kansas City Chiefs at the first Super Bowl in 1967. (TSN)

The Bengals are one of six active teams that have not won a Super Bowl, NFL Championship, or AFL Championship. The other five are the Vikings, Atlanta Falcons, Carolina Panthers, Jacksonville Jaguars, and Houston Texans.

The Rams appearance at Super Bowl LVI at SoFi Stadium makes this the third time a participating team is playing in its home market and the second time in its home stadium.

Los Angeles Rams have 4 times changed team names. Originally the team was founded in 1936 as Cleveland Rams and was known from 1936 to 1946.

From 1946 to 1994, after a settlement reach, owners Dan Reeves and Fred Levy Jr. Reeves were allowed to move the team to Los Angeles, setting in Los Angeles Rams as the new team name.

Lastly, returning back to Los Angeles, the team settled as Los Angeles Rams from 2016 to the present. (Wikipedia) 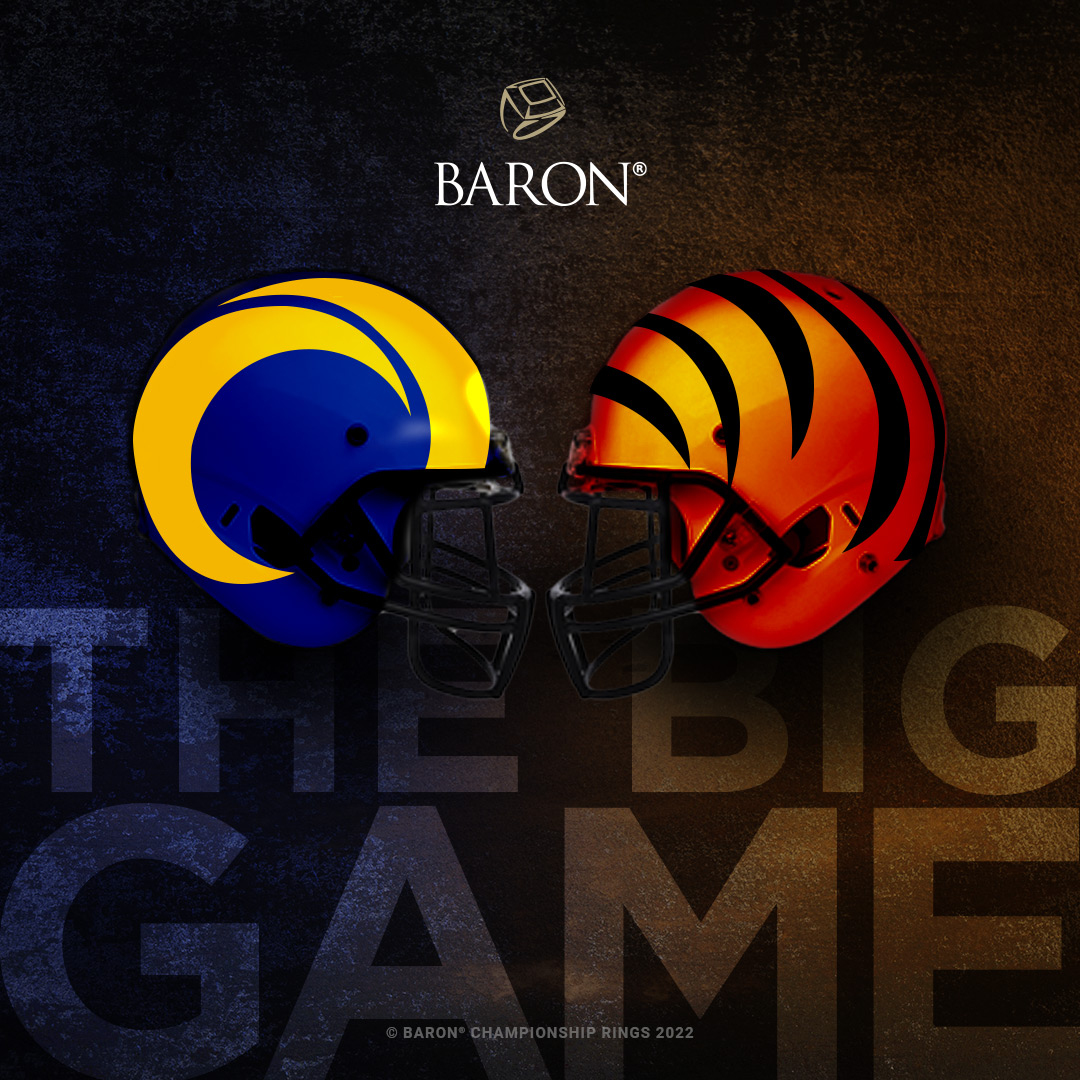 2022 Big Game: 22 facts to know about the Championship

Congratulations to both teams on their hard-fought battle, and to all the teams for a great football season.

Baron® recognizes the hard work, dedication, and determination these athletes put in during their journey to a Championship.

Be sure to share the 2022 Big Game Blog: We hope you enjoyed the 22 facts to know about the teams that chased the Championship and be sure to let us know your favourite moments.

WE GOT A REALLY BIG TEAM pic.twitter.com/MKCb00d1rv